“For as in this world, headwinds are far more prevalent than winds from astern (that is, if you never violate the Pythagorean maxim).”
-Herman Melville, Moby Dick

In my last commentary, I wrote at length about the law of inertia and how it impacts both commodity markets as well as our decision-making processes surrounding them. If you missed it, the main takeaway was simple – in a rising market, you can disrupt commodity inertia’s impact by making calculated and informed decisions, or you can sit back and watch inertia steamroll your energy budget in the blink of an eye. Put even more simply, incidental inaction is not a risk-mitigation strategy. Furthermore, I forewarned that $5/MMBtu-$6/MMBtu natural gas prices were certainly not out of the question moving forward, and underscored the fact that our current natural gas storage trajectory may require domestic prices to continue to rise in order to compete with the global price environment, resultant of surging demand overseas for the increasingly reliant and exported bridge fuel. My sincere hope is that every one of our clients took heed and took action, but I also know that, in the immortal words of Ellis Redding, “Hope can be a dangerous thing. Hope can drive a man insane.” If you were hoping for natural gas prices to subside ahead of the fall shoulder season, you may be slightly maddened by the current state of the market. Indeed, $6/MMBtu reared its head earlier this week amid the many headwinds facing the market, as it turns its eyes to what may prove to be one of the more pivotal winter seasons for the volatile commodity in recent history. The headwinds are surely apparent and strong, but there are still viable routes for navigating these choppy conditions.

Firstly, the market will remain undersupplied through this coming winter and well into 2022, even with prices above $5/MMBtu. Secondly, the current natural gas storage trajectory remains on track for the second-lowest end of injection-season of the past decade. Hurricane Ida’s devastation to Gulf Coast production operations resulted in significant amounts of natural gas production taken offline both now and well into the future and forced the market to reevaluate the natural gas storage trajectory. This sent NYMEX futures to seven-year highs in relatively short order and there have been even greater headwinds since generated by Europe’s energy crisis, which in turn, is likely to gobble up all of our exporting capacity not only this winter but well into 2022, as there is an impetus to replenish their storage and rebalance the European market. Bear in mind that European demand is competing for cargoes with the likes of Asia where demand is also surging – both markets are currently fetching around or above $25/MMBtu, which could potentially be a realistic domestic price point stateside should we need to shut-in export demand with competing prices. Citigroup recently more than doubled its forecasts for Q4 LNG prices and said prices could surge as high as $100/MMBtu in the event of a cold winter. In either case, export prices have and will continue to boost NYMEX futures. Looking ahead, LNG demand is likely to rise sharply this winter, and even this week, Sabine Pass Train 6 received FERC approval to begin increasing feedgas demand for export purposes. Thirdly, once gas eclipsed $4 (way back when, 1.5 months ago), gas-to-coal switching became increasingly exhausted as a market-balancing mechanism, which has effectively made supply/demand fundamentals less price-responsive. That opens the door for increased volatility which made an appearance in a big way this week as traders opted to cover short exposure as the October delivery options and contract rolled off the board, allowing the October contract to extend its move higher. Over the past five weeks, the October contract has now risen a staggering $2.23/MMBtu (57%). Contracts for the balance of 2021 have largely followed suit. In the event that gas-to-oil switching in the power sector becomes economical, we could be looking at doubling or tripling the current NYMEX futures.

Finally, how long this precipitous rise will last hinges on some major unknowns, namely weather – and that’s not great news for an already spooked market. The hope is that energy prices moderate once the November contract becomes the prompt-month contract and hopefully a warmer October helps soften the near-term fundamental outlook. As it stands, the forecast calls for low late-season cooling demand in the southeast and low early-season heating demand in the Midwest, which is a bearish setup and could lead to some heightened volatility to the downside. A reminder that even though Melville’s headwinds have been more prevalent lately, there can be winds from astern – especially when supply and demand become rigid, as is the current case. As an example, just last week, the October contract dove a whopping $0.95/MMBtu within four trading sessions. Generally speaking, the market is attempting to capture the price risk associated with an extreme scenario in which a natural gas shortage develops. Realistically, there are two potential outcomes in the coming months and the prevailing outcome will be entirely dictated by the winter weather. Firstly, if Oct-Dec proves to be warmer than anticipated, storage trajectories may rise and shortage risks will subside, pulling down the NYMEX with it. If a cold start to the heating season shows up, then concerns will be amplified about an undersupplied winter market, with truly explosive and outsized price impact. Either way, the former will have a muted impact on prices compared to the latter – so the risk remains heavily weighted to the upside for both natural gas and electricity futures over the coming months. Furthermore, whatever price action lies ahead will largely dictate the trajectory of futures in 2022 (more significantly) and 2023. These fundamental headwinds will likely persist for the next few years as global energy markets grapple both with rebalancing efforts and determining to what extent and at what cost we will utilize natural gas as the bridge fuel for a more sustainable energy landscape. 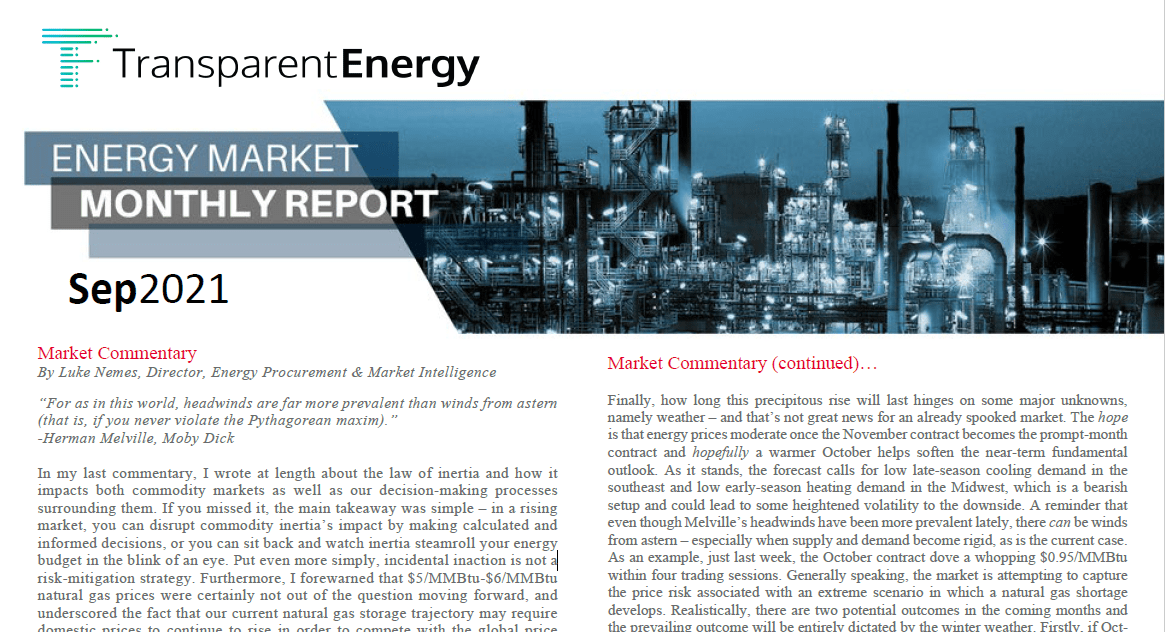