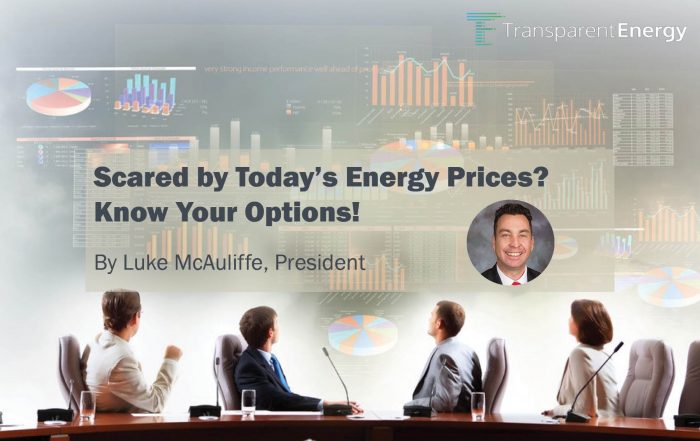 “A confluence of entrenched domestic demand, mounting calls for U.S. exports of LNG and modest production growth – all factors forecast to endure – propelled natural gas futures above $9.00/MMBtu in August and could keep upward pressure on prices for years.”

There’s a lot of information to unpack in that one sentence, but for those of you who have been reading my articles, and those of my colleagues at Transparent Energy, over the last two years, the wisdom imparted here should come as no surprise:

Later in the NGI piece, an analyst says prices could climb to $13 or higher, capping off his comments with, “We could see some pretty horrific numbers.”

Again, those of you who know Transparent Energy and read our regular stream of market insights and commentary understand we are not scare mongers. Our business is built on sharing information with energy buyers (electricity, natural gas, renewables) like yourselves so you can make fact-based procurement decisions.

Over the course of the last three years, we have also written many articles about the superiority of online auctions for procuring energy for your company’s or portfolio’s needs. Most people remember that online auctions work so well because they spur competition among suppliers, forcing them to bid down the price for your energy contract.

That, of course, is one of the beauties of our online auction process – getting the best price from the market. But Transparent Energy’s online auctions deliver many other benefits, another of which is critically important to you right now in this historic, extremely volatile (and challenging) energy pricing environment: price discovery.

When Transparent Energy runs an online auction to procure energy for a client, we don’t just run one auction – we run several in succession. Over the course of one auction event, we might run an auction for a 1, 2, and 3 year term; we might run those same terms again but for a variable vs. fixed-price product; and on top of that we might layer in different amounts of green energy.

I’ll show you exactly how this works in a minute, but the key thing for you to understand is that by having Transparent Energy run your energy procurement event via an online auction you will gain something not available anywhere else in the market: you will get to see exactly how the market is pricing your energy load.

So what does this mean in practice? It means everything, because it gives you options – it puts you in control to make the best decision.

Recently, we ran an auction for a school district in the Midwest. Like any budget buyer, they were dreading having to go to market with electricity prices so high. In fact, they told us ahead of time that they would not go out further than two-years (i.e., they would not sign an electricity contract beyond 24-months because of current high prices).

We understood their reluctance, but counseled them to at least consider longer term lengths based on the data. We asked them to simply watch what the auctions yielded and base their decision on the facts.

What do you think happened?

Transparent Energy ran a textbook auction. First, we aggressively marketed the school district’s RFP, attracting nine suppliers to bid on their load. Consider that: nine! (That’s another reason you should be working with us to procure your energy: supplier liquidity. When you increase the number of qualified suppliers bidding on your business, competition increases, driving down your price. In other words, you win!).

Then we had the suppliers bid on 5 different terms (three of which went beyond the customer’s preferred 24-month window) on a fixed-price product.

That’s when the magic of the auction process truly revealed itself. Over the course of 43 minutes, the suppliers bid 324 times, driving down their prices. But the process also revealed something that totally won over the client: suppliers were willing to dramatically reduce their price/kWh the longer they went out. 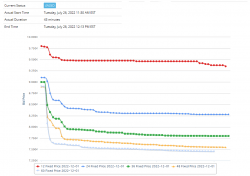 Once the auction process delivered facts to the client, the buying decision became that much clearer. The winning bid for a 60-month term delivered a price/kWh savings of nearly 10% compared to the 24-month term, a huge difference, especially considering the client purchased 20 million+ kWh of power.

Simply put, the online auction process changed the client’s mind. The school district got to see for itself how the market priced a fixed-price electricity product over a 1 year, 2 year, 3 year, 4 year, and 5 year term. The 5-year term delivered a much better price – enhanced even further by the competitive dynamics of the auction – one that made the pain of buying electricity during a time of great volatility and expense (and which many experts fear will get even worse) much less severe, in fact, even manageable.

Put another way, the auction gave the client options. Knowing those options made all the difference. You deserve to know your options, too.

To know your options, reach out to us today. Contact Jonathan Le at jle@transparentedge.com